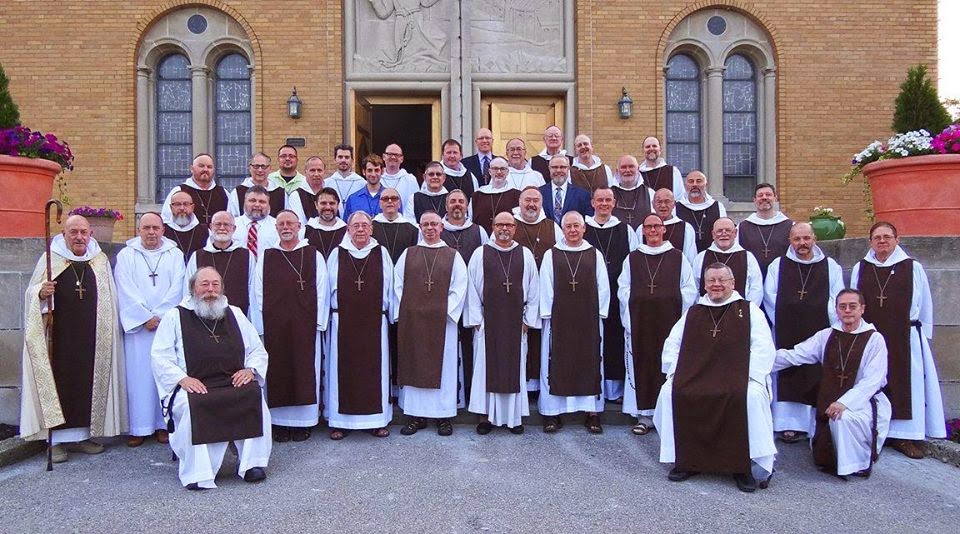 Religious Life with the Brotherhood of St Gregory

We had one of our best convocations/chapter gatherings in late July at Mt. Alvernia, a Franciscan Friary and Retreat Center in Wappingers Falls, NY.  Five new postulants began their journey with the community, and two members took their first vows.


Many people ask what happens when someone is interested in the community.  It's important to know that in an intentionally dispersed community such as ours, we only interview prospects in the fall and spring, and they only are able to enter the community at Annual Convocation, held each summer in July or August.

BSG began as a community of church musicians on Holy Cross Day in 1969.  Our Founder and still Minister General was and is a church organist.  As the years went by, he realized we needed to have people who do varied ministries in the church, even though we still number several musicians. Although most of our members are lay, including the Minister General, we do have priests and deacons.  All are brothers, and we do not have the problem of clericalism that many communities do.

Our postulancy is one year, followed by a two year novitiate.  Since we are an intentionally dispersed community, and don't live together, postulants and novices are assigned a mentor to work with during formation.

Here is a good reflection on our Vows by Br. Karekin, who is the Minister Provincial of Province VIII (San Francisco):

Chastity - People are ends and not means. They are not possessions. They have integrity and dignity and wholeness and so should you. Free yourself to love.
Obedience - Freedom is not about doing what you want. It’s about being released from the prison of selfish desires. Stop manipulating circumstances and people to get what you want.

The question becomes - why do we make the three vows of Poverty, Chastity, and Obedience? Our vows are not ends in and of themselves. They are means. They force us to become aware of the idols we have erected in our lives that distract us from our responsibility to love and serve God and others. They are the means by which we learn to tear those idols down. What idols, or obsessions if you will, do the vows help us to recognize? Poverty points to our obsessions with security and safety. Chastity points to unhealthy pursuit of affection and the esteem of others. Obedience to our desire for power and control. We are distracted from God when our inordinate attachment to these things warps our sense of perspective and proportion. The three vows provide starting points for dismantling the systems we have built up, culturally and individually, that draw our love inward towards the self and it’s desires rather than towards God and other.

As an intentionally dispersed community, we do not live together in a friary or monastery. We are friars, and not monks.  A monk remains within his community in the monastery, while a friar generally has assignments "in the world."  Our brothers support themselves and the community through their individual jobs.  As noted, we have priests, and they have parishes where they work. But we also have a medical doctor, nurses, a psychopharmacologist, chaplains, social workers, IT people, administrative people (I work as the assistant to the president of a seminary) and a host of other jobs "in the world."

We have married brothers, we have gay brothers who are married or partnered. We are seeking people who are willing to accept others and to not be judgmental. In our community, Chastity is living with all in love, without possessiveness or the desire to control.   Our vows of poverty, chastity and obedience are understood in a contemporary way.  Our Vow of Poverty tends to trip people up.  I try to be very clear to people on this point.  So I always urge people to read this next part carefully.

Prior to entering novitiate a brother will be at the point of contributing ten percent of his Annual Gross Income at a minimum to the Brotherhood and the Church (a minimum of five percent of AGI to the Brotherhood), and that if not at that point prior to entering the postulancy, the candidate has one year to reach it. If that is not possible, because of outstanding debts or other circumstances, he should consider deferring his application until he is within one year of reaching the goal."

Should someone be invited to come to convocation and become a postulant after interview, there is a long period of study, with a mentor, before vows are taken. Postulancy lasts at least a year. It's a period of "probation" where new members begin their training in the religious life.  A postulant may withdraw from the community at any time if he feels that the life of this community is not where God is calling him to be.  Once postulancy is complete, a person becomes a novice. The novitiate lasts at least two years, and is a period of further study, again with a mentor.  After that, a person is eligible to petition council for first vows.  If council agrees, the active professed brothers in a brother's province vote to determine their support of his profession. A brother is in annual vows for five years, and can then petition for life profession, or continue in annual vows.

During the postulancy, we encourage people to not be concerned with such questions as "When do I get to wear the habit?"  We have long said that our true habit is the cross that all of us wear - whether it be the plain wooden cross of a postulant or novice brother; or the heavier, metal cross worn by professed brothers.

Ron, BSG
I'm the Director of Vocations for the Brotherhood of St. Gregory, a community of the Episcopal Church. I work as the Assistant to the President of the Bexley Hall Seabury Western Foundation, a seminary with locations in Chicago and Columbus, OH. I work at the Chicago campus.